The UTDRF is supervised by an officer of the rank of Inspector General of Police who in turn is assisted by a Suprintendent of Police who is Supervisory Officer of UTDRF, Headquarterd at Leh. The purpose of creating the UTDRF wing is to build safer and diaster resilient UT through prevention, mitigation and preparedness. After the re-organisation of erstwhile J&K State into two Union Territories, the SDRF components deployed at Leh and Kargil district were re-designated as UTDRF. The two UTDRF components depolyed at Leh and Kargil district are headed by an officer of the rank DySP's and both components are supervised by an officer of the rank of Superintendent of Police.
The aim of UTDRF is to:
1. To save life
2. To minimize the damage to the property.
3. To keep the high morale of public during any natural as well as manmade calamities. 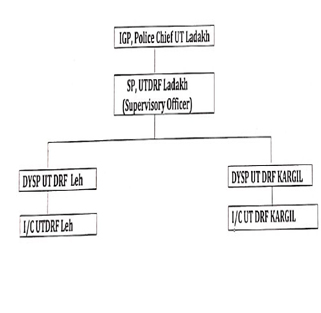